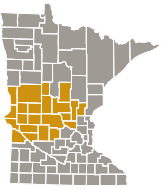 The West Central District encompasses a large portion of the center part of the state, from the Dakota borders and Fergus Falls and Montevideo on the west, to Mora and Elk River on the east.

With cities like Alexandria, Brainerd, St. Cloud and Wilmar scattered in between, there is no real population center to draw the district together. Meetings have generally been held at St. John’s University in the fall.